Fireside chat: The state of Black banks in the U.S. | Blend
Skip to content

Fireside chat: The state of Black banks in the U.S. 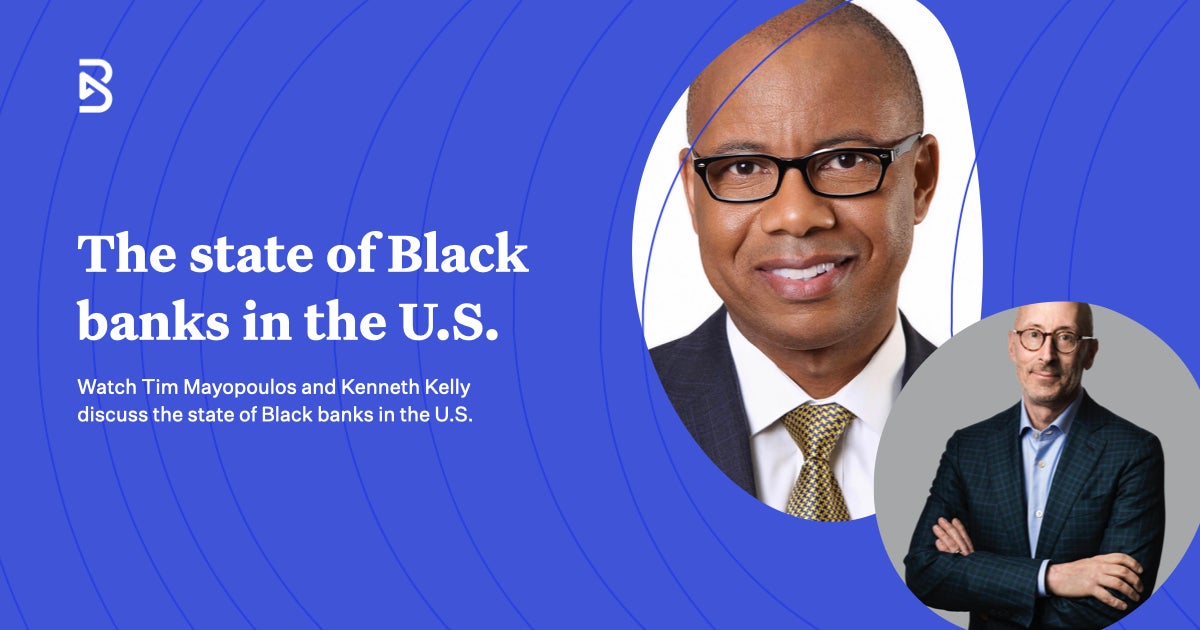 We recently celebrated Black History Month at Blend, and among the many Black@blend ERG-sponsored events was a virtual fireside chat with Blend President Tim Mayopoulos and First Independence Bank’s Chairman and CEO Kenneth Kelly. The focus of the chat was the state of Black banks in the U.S.

Both guests were joined by Blend’s Head of Global Impact, Equity, and Belonging Ulysses Smith as they outlined the main differences between traditional banks and Minority Depository Institutions (MDIs), the respective challenges facing all U.S. banks, and the role technology can play in promoting financial equality as the world looks toward the future of banking.

Dating back to at least 1865 with the Freedman’s Savings Bank, MDIs and Black-owned banks have created pathways for economic development in racially segregated areas. They experienced a steep decline following the Great Depression, but there was a brief resurgence of Black-owned banks during the 1970s, with the civil rights movement encouraging economic empowerment within Black communities. In fact, as Kenneth Kelly pointed out, First Independence Bank was a positive outcome of the 1967 Detroit Riots.

In neighborhoods without major banks, MDIs provide opportunities for financial services that wouldn’t necessarily be available. In addition, they increase the likelihood of building intergenerational wealth by approving home mortgages for local populations at higher rates than major banks – for example, mortgage originations to Black American borrowers at MDIs exceed 75%, compared to 10% at other institutions.

The persistent racial wealth gap remains one of the biggest obstacles to achieving equity in the United States. In 2020, 74% of white families were homeowners, compared to 45% of Black families. The homeownership gap hasn’t been this wide in 100 years.

However, despite consumer access to more banking options than ever, of the 5,000 federally-insured commercial banks in 2020, just 142 — or 3% — of them were MDIs. MDIs offer services that promote financial stability and equality in communities that need them most. But offering efficient, affordable, and accessible services has become increasingly difficult when the majority of these institutions have comparatively little capital to work with.

George Floyd’s murder on May 25, 2020 sparked a reckoning over economic inequality and started a conversation about the importance of MDIs. Seeking ways to address the deeply entrenched socioeconomic disparities between Black and white America, corporations and everyday Americans put a cultural movement in motion to support Black-owned banks and businesses.

Since then, an estimated $150 million in equity capital has been invested in Black-owned banks. And while those funds have been critical to the Black banking community achieving a stronger position, tackling capital concerns alone won’t help MDIs sustain the much-needed momentum created by the movement.

Even though financial institutions across the country are faced with increased competition, capital adequacy, and obstacles on the road to digitalization, MDIs are often just as vulnerable as the communities they support, making those same challenges even more difficult to overcome.

Technology for another century of service

Driving down costs, promoting efficiency, creating excellent consumer experiences — these are needs common to all financial institutions, but they’re more acute with MDIs. There’s a lot of speculation around the future of banking. And while no one can actually predict the future, one thing is abundantly clear: strategic technology modernization and adoption are critical for financial institutions to remain relevant.

But if larger, more traditional banks with significantly more capital have been struggling to overhaul their technological capabilities, where does that leave MDIs?

Through the years, MDIs and other community banks have shown unwavering commitment to the communities they serve. Preserving and enhancing these institutions should be a top priority – and making new technologies more accessible and affordable for MDIs is perhaps one of the most impactful ways that companies like Blend can contribute to a future where finance is accessible, equitable, and proactive.

Want to learn more about how Blend is supporting MDIs?