Explore his philosophy on career success, the importance of investor relations, and what he’s looking forward to as he joins Blend. 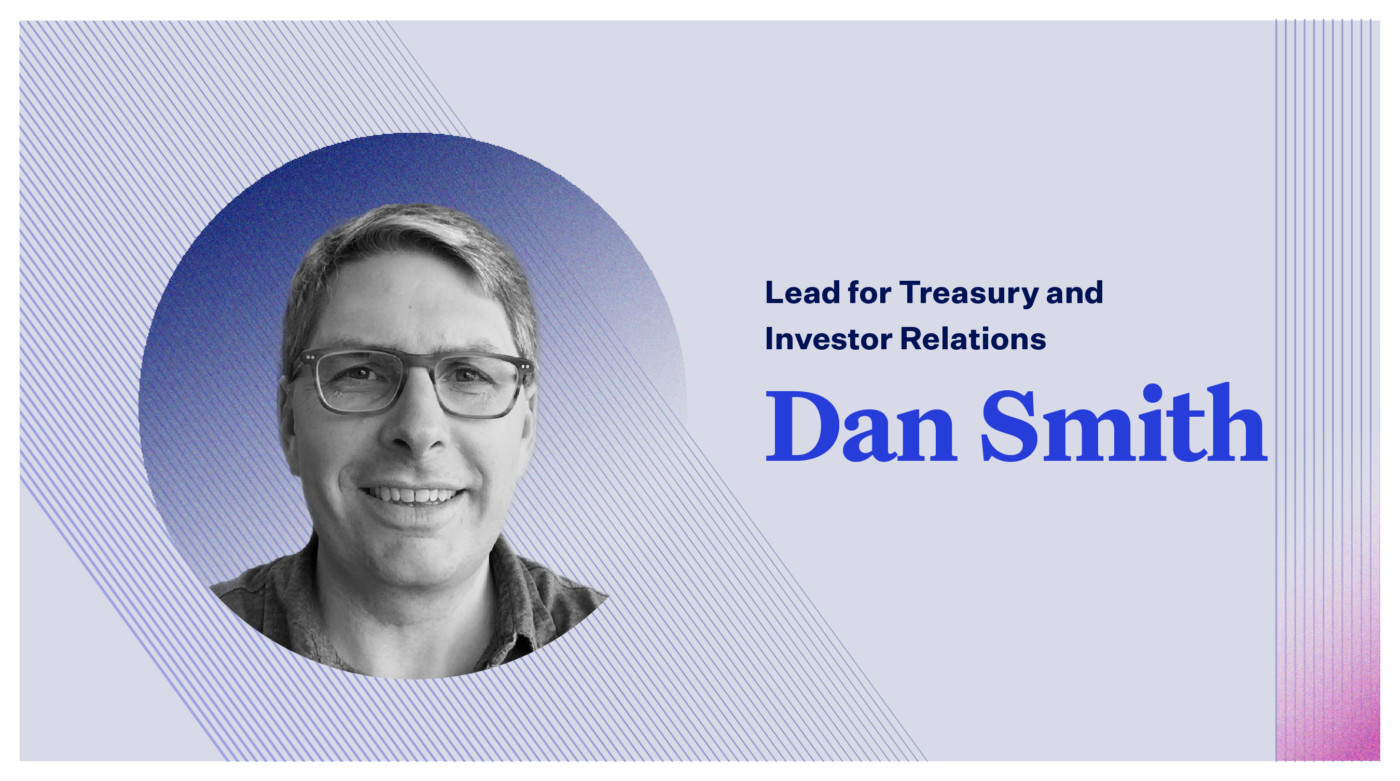 It’s often said that a company is only as good as its people — and at Blend, we take that to heart. We’re excited to announce that Dan Smith is joining Blend’s finance team as Treasury and Investor Relations Lead. Dan is a seasoned financial services professional whose significant experience will play an invaluable role in ensuring our continued success and growth as a publicly traded company. We’re thrilled that Dan took the time to let us get to know him a little better.

Tell us a little bit about yourself and your background. What led you to investor relations?

Dan: I went to Princeton for undergrad, and I had an opportunity to play football and lacrosse there, which was a terrific experience. My reason for going there was two-fold: I’ve always loved learning, literature, and language, and broadly speaking, the liberal arts as a discipline. In addition, Princeton had a nice manner of integrating student athletes into the general student body population, and that felt really good to me as a prospective student athlete. I was a Religion major and I got to work with some really great academics.

I then graduated and had to find a job, so I initially started doing banking with Banker’s Trust in New York. Then I worked in a portfolio management group at Smith Barney before going to business school at Duke University, where I majored in Finance and Management of Financial Institutions. I wound up at Freddie Mac from 2002 to 2010, leading up to and then during the financial crisis, which is where I really got my first introduction to investor relations. We had just completed a big financial restatement and the company needed to relaunch its investor relations program.

Most recently I was in charge of Investor Relations at CoreLogic for a little over 11 years. I helped take them public in 2010. They were very successful as far as the turnaround, in terms of ramping, revenue growth, diversification of revenue, and capital return. Ultimately, they were acquired by two private equity firms in June of this year (2021). So, it was the opportune time to evaluate my next career move.

How did you first hear about Blend? What was it that caught your eye and piqued your interest? When considering joining Blend, what stood out to you?

Dan: I first heard about Blend probably five years ago when we were doing a lot of strategic work at CoreLogic. Blend was on our radar as a company that was exceptional in creating highly accessible and user-friendly interfaces in addition to being very forward-looking in terms of creating a positive customer experience while taking time off the mortgage origination process.

So, I’ve always known a little about Blend. It was a really opportune moment for me. It was like, I’ve got my current job where I’ve been for 11 and a half years that’s coming to a close, and here’s another company I’ve always had great respect for in an industry that I know and love. It was also an opportunity for me to expand my role and responsibility from strictly running investor relations to also overseeing treasury.

What’s a misconception a lot of people have about investor relations?

Dan: I think of it like this: many years ago we were in Colorado with my family, and we decided we were going to do a morning hot air balloon ride. It was my first time ever, and we were up there together in various stages of fascination — or abject fear. I turned to the pilot and said, “Hey, you know this is very peaceful and fun. I thought it was going to be more exciting.” The guy turned to me and said, “You don’t want it to be exciting. You’re 7,000 feet up in a wicker basket with a can of propane and a flame and some silk.” Which isn’t a bad analogy for investor relations.

You really don’t want it to be exciting. It is truly about managing perceptions as effectively as one can while interfacing between the company and public markets and investors. I think most people think it’s wining and dining and golf and business travel.

What do you want Blend analysts, investors, and your Blend teammates to know about you?

Dan: Wow, I would like them to know that I’m really intellectually curious and I am pretty direct. That said, I try to listen to perspectives and needs so that I can understand where people are coming from, because I find that really helps to frame discussions and shape where the relationship goes. Essentially, I would like them to know that there’s a combination of “I care” and “I’m independently-minded, fact-based, direct (hopefully not too direct), and intellectually curious.” Some mishmash of that.

For fun, I like to backpack and fly fish — to get outside and do a whole lot of stuff outside. My whole family enjoys that.

What are the benefits of having a strong investor relations function?

Dan: I think a strong investor relations function can help an executive team and a board appreciate the priorities and time horizons of public investors. That can contribute to shaping priorities for public firms in a way that can help the board and the executive team stage priorities, manage capital, and ease relations with the public markets, while balancing the interests of the company’s various stakeholders.

Part of the investor relations function is to create an environment and a culture within a public firm such that public markets, investors, and analysts understand the firm’s and the board’s priorities and objectives. There’s a virtuous cycle in the relationship between the executive team with how they plan and serve customers, the board with how they oversee set objectives and compensate executives, and investors with how they receive the financial results and anticipate the growth and the risks that the company will take.

If you weren’t working in the mortgage and financial services space, what do you think you would be doing?

Dan: I had the opportunity to think about: was I going to go teach high school history and coach, or was I going to go buy a sprinter van and visit all the national parks? And because I’m 52, not 62, and because what I really enjoy is working with management teams and markets as part of a company, it was too early to do the first two. Teaching and coaching is going to have to hold off — and there’s a two-year waiting list to get a sprinter van anyhow.

What’s the best piece of professional advice you’ve ever gotten?

Dan: Do work that you think you’re good at, that you think contributes beneficially to other people, to an organization, and to society as a whole. If you can find that good work to do, and if it pays you well enough to live a lifestyle that you think you can manage in a place where you want to live, it’s probably a good opportunity.

What are you most looking forward to in your new role with Blend?

Dan: You know, I’m actually really looking forward to coming out to San Francisco and going to New York and meeting people in person. It’s hard to onboard virtually, but I think the company has done a really terrific job. It’s really interesting that the company has embraced that so firmly and has done such a good job in terms of integrating people into the company and getting them up and running in the workflow as effectively as I’ve experienced. That’s not easy. So kudos to everyone. I know it takes a lot of planning and it doesn’t just naturally happen. But I’m most looking forward to actually meeting people in person because at the end of the day, I’m a people person.

Analysts and investors can reach out to Dan at dsmith@blend.com.

Curious to learn more about our approach as a public company?