Dive into our conversation with three recent apprentices to see what they had to say about changing career paths and breaking into the tech industry. 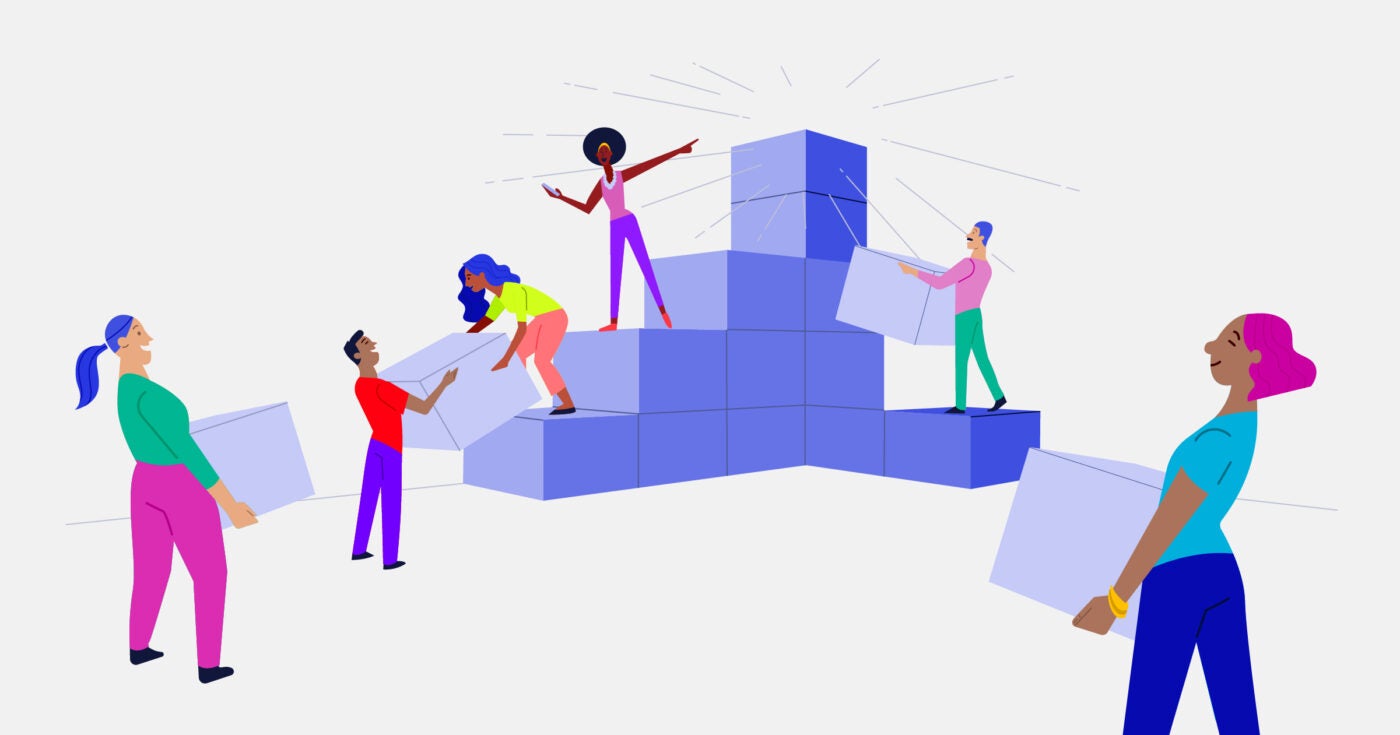 The concept of paths — those we take and those less traveled — is integral to the human experience. At Blend, we know that no two paths are alike, and we recognize that top talent can be found in many different places — including outside of formal degree programs. We also know that, for people who come from underrepresented backgrounds or who haven’t been able to earn a traditional degree, there are a number of arbitrary barriers to contend with on the path to a career in tech.

In an effort to break those barriers, we’ve partnered with Onramp to launch an apprenticeship program for emerging software engineering talent who don’t fit the “traditional” profile. Candidates are often self-taught or have completed boot camps and have little-to-no industry coding experience. But they should have a baseline knowledge of tech, proficiency in a programming language, and understand the fundamentals of software engineering. Over the course of five (soon to be seven) months, the program provides hands-on training and real world experience while working with both the Onramp and Blend teams.

The ins and outs

This year, apprentices worked with Onramp during their first month to develop their skills. They completed a full-stack project that was outlined by Onramp and Blend engineering managers, giving them experience with the programs, tooling, frameworks, and testing that are used at Blend. Upon completing their first month, apprentices joined an engineering team at Blend and were paired with a manager and mentor.

Over the course of four months, and with consistent support from their managers, mentors, and teammates, our apprentices worked on meaningful projects at Blend and continued strengthening their professional development — leading to full-time employment at Blend upon successfully completing the program.

We were able to take some time and speak with Megan McDevitt, Adjoa Quansah, and Diana Liang about their respective paths to software engineering, their experience as apprentices at Blend, and advice for people wanting to build a career in the engineering field.

Ready to hit the ground running with a new career in tech?

In their own words

Question 1: Tell us about yourself and your journey into engineering .

Megan McDevitt : I spent the first decade of my working life as a professional musician and music teacher. While studying for my doctorate in double bass performance, I began experimenting with performing with electronics. I learned to generate and manipulate my own sounds using a program called Max/MSP, which is based in C, and fell in love with coding. This began a move toward software development.

I enrolled in Nucamp Full Stack Bootcamp and decided to make a career change. After finishing bootcamp, I joined a team with Code for America, participated in hackathons, created personal projects, contributed to open source, and did some small contract work as I looked for my first job in tech. I found Onramp because of a post in a Slack group and I jumped at the chance for an apprenticeship. I could not be happier with where I landed.

Adjoa Quansah : Growing up as a child whose dad was a software engineer, I was greatly influenced by and exposed to technology. Even though I was intrigued by technology, I didn’t see myself going into software engineering. I didn’t want to take the career track of my parents because I wanted to forge my own career path.

I ultimately chose to pursue a career in the medical field, attending college with the goal of becoming a doctor, while majoring in business. However, through volunteering in hospitals, I discovered I didn’t have the passion to attend medical school. I chose to utilize my business degree to work in tech, which exposed me to software engineering for the second time, and my curiosity for technology came back.

Being more immersed in the field, I saw that software engineers have varied backgrounds, which encouraged me to pursue my own coding career. I started my journey at the beginning of 2020 by learning Ruby through Udemy, and I eventually attended a coding bootcamp. Through that experience, I learned that software engineering is a field where I would be challenged to continuously learn and innovate. I also learned that nailing the fundamentals and continuously practicing them translates well in the long term, since the majority of languages follow the same logic.

Diana Liang : Before engineering, I studied disease biology at UC Davis and worked as a lab research intern at the Cantu Lab, researching plant pathology for viticulture (Grape Leaf-roll viruses!). During my time researching, I had the opportunity to write code with R for data analysis. The experience nudged me into taking an introductory course in C, which further led me into learning more about software programming.

After finishing my studies in biology, I ultimately decided to make the switch to study software development and started with basic iOS development through Udacity. After the program, I eventually enrolled into Rithm School to study full-stack web development for a more guided learning experience with mentorship in a collaborative environment.

Question 2: Why did you seek out an engineering apprenticeship?

Megan McDevitt : It is tough to break into this industry without a degree in computer science. I knew I wanted to work somewhere that allowed me some space to grow into the role as well as make meaningful contributions and learn as much as possible.

Adjoa Quansah : Before even graduating from boot camp, I knew I wanted my next role to be an opportunity where I could take time to learn from other software engineers, since it was a new skill set for me. From talking to other people within the industry, I deduced that an apprenticeship was the right opportunity that had everything I was looking for.

Diana Liang : I sought out an apprenticeship because it is the perfect opportunity to learn and grow quickly, thanks to the close mentorship involved throughout the program.

Question 3: What skills did you develop during your apprenticeship at Blend and what support did you have?

Megan McDevitt : I have always valued clear communication, but I really worked on honing that skill when it came to coding. Being clear about what your error is, how you have tried to solve it already, and what is still blocking you is essential to getting effective help.

My manager and I met weekly and I had a mentor who helped me get settled and was available to answer my questions pretty much whenever I needed. While I was working on my first feature, I also got to learn from a more experienced engineer who had enough context to review my code and explain high-level interactions at Blend to me.

From the first day of the apprenticeship, my manager and mentor gave close support towards my development as an engineer. My colleagues as well have given me their support whenever I needed any help to get through a challenge.

Question 4: What has the transition from apprentice to full time been like?

Megan McDevitt : It has been pretty seamless. The salary and benefits are of course the biggest differences, as well as the time flexibility. Other than that, I feel I have pretty much been carrying on my work similarly to the way I did during the apprenticeship.

Diana Liang : For me, the transition has been great. The apprenticeship program prepared me well for the full time responsibilities.

Question 5: What advice do you have for people interested in breaking into engineering?

Megan McDevitt : I have a lot of thoughts on this! Check out my Medium article.

Adjoa Quansah : Just go for it and give it your all. When I initially started on my journey, I had a lot of doubts that actually led me to delay my entrance into a coding bootcamp. I didn’t think I could be a software engineer. However, once I finally started learning the material, I realized I could do it as long as I put in the work.

Diana Liang : Always continue to learn and write lots of code. I definitely recommend Blend’s Software Engineer Apprenticeship program to anyone that is looking to break into engineering.

The saying goes, “you’ll never know until you try,” and that is especially applicable for career choice. We all grow up with a vision of what we want to be as adults, but sometimes the reality doesn’t quite match the dream — and sometimes we are just never given the opportunity. For those who do have traditional degrees, switching careers often means going back to college, which is not financially feasible for most people.

Apprenticeships are not new — we just typically tend to associate them with trades like carpentry or construction. As the need for qualified candidates in the tech industry grows, so, too, has our awareness that we need to make that career path more accessible. Which is why at Blend, we recognize that creating a pipeline to help, train, and offer the possibility of full-time employment for diverse candidates is an essential part of that process.

Looking to forge a new path in the tech sector?